My son, Connor, is an actor. 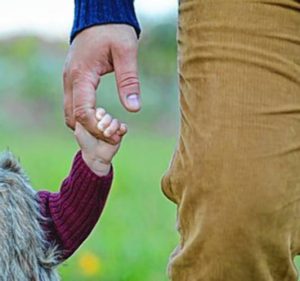 My wife, Denise, and I have watched him in all sorts of plays from heavy drama to children’s theater, with roles ranging from playing a meth addict to a rat in “Thumbelina.”

Many of his characters have dark and troubled back stories, so I’m used to seeing my son perform on stage as a vulnerable person or someone facing trauma or great adversity.

But nothing prepared me emotionally in seeing him in the role of Ted in “God’s Ear,” a powerful play by Jenny Schwartz about a married couple whose young son has just died in a swimming accident.

Ted, the husband, is a businessman who travels extensively, struggles with his grief and the enormity of his guilt over being an absent father. He escapes reality with alcohol, marital affairs and with more travel and more work, which makes him a stranger to his young daughter.

In one scene, Ted wishes he could bring his son back and had spent more time with him. “I just want my son to grow up and be happy,” he laments.

I think about that scene a lot. Sadly because it hit too close to home.

This Father’s Day, while I can’t fully understand, thank God, what it must feel like to lose a child, I can, like many military fathers, relate to separation and the inability, at frequent times in my own kids’ lives, to stay connected with them.

I estimate that I was away from home more than three years of my children’s early lives. That’s a lot of birthdays, after-school meetings, vacations, ball practices and just moments that I will never get back.

Both of my children, Connor and Meghan, are now adults and doing well, but they will forever be affected by the times in their lives when I wasn’t present. And even when I was “there,” I was often not fully aware of their own pains and struggles.

A child without a father in his or her life faces a higher risk for nearly every social pathology. They are likelier to drop out of school, go to prison, smoke, have psychological problems, get pregnant as teens, suffer from depression or commit suicide.

Children of military parents who have served in a war zone experience anger, sadness, fear, confusion, and feelings of abandonment, loss, anxiety and depression at greater rates than their peers in non-military families.

On top of that, many veterans themselves are working through their own difficulties.

Believed to be the first of its kind, the group consisted of dads who through their military and post-deployment experiences have a unique bond — they have suffered the range of challenges in being an active and responsible father — from struggling with post-traumatic stress, depression, substance abuse, joblessness, homelessness to legal issues, such as custody and visitation and relationships with their children’s mothers.

Founded by two VA peer specialists, Jason Allen and Jerome Douchette — veterans who are certified to help other veterans by formalizing relationships through peer counseling — the support group was started after Allen and Douchette saw a significant need for male veterans to meet and learn from their experiences in growing and developing their father skills.

The peer support group talks about “self-care,” health, respect, and life skills, and uses a curriculum that develops attitudes and skills for “male nurturance.”

Designed by family counselor Mark Perlman, the class uses a work book that defines a “nurturing father” as a “man who actively provides guidance, love and support to enhance the development and growth of children for whom he cares.”

Allen said it became apparent to him that such a class was needed because so many veterans, like himself and Douchette, are dealing with a multitude of barriers in striving to be the responsible fathers they want to be. That includes working through, at times, seemingly insurmountable obstacles that fathers face with visitation, custodial issues and child-support battles with the judicial and family court system.

“There was nothing out there to help us,” said Allen, an Army veteran who served in Iraq as a 19-year-old and who needed support as a young father. “The veterans we meet with are trying to figure things out, and I would say, ‘Up to now you’ve been on your own — how’s that been going for you?’”

Not very well. Like during their military service, veterans do better with teamwork, which is what the class emphasizes.

According to Allen, veterans who are fathers need their own group because their experiences are different from those of women veterans or other mothers.

“The reality is that the institutions of society put up large obstacles between fathers and their children,” said Allen.

It’s then a double whammy when a male service member returns home from war, and struggles with readjustment, perhaps has PTSD or anger issues and someone tells him he is “not fit” to be a father and can’t see his child.

Participation in a child’s life is most important to these dads.

The common theme to the class, Douchette says, is finding ways or overcoming barriers to becoming more involved in a positive and productive way with their children.

It’s also about being the parent that we should all strive to be — treating our children with respect and being a good role model. That’s done, in large measure, they both say, by prioritizing our children.

As we celebrate what it means to be a dad this Father’s Day, let’s remind ourselves of the importance of a strong father-child relationship. Not an absent father who may pay an occasional visit and provide financial support. Not a disconnected father like the Ted character my son Connor played in “God’s Ear” that hit home for me.

A favorite quote that Allen uses in class is from the anthropologist Margaret Meade: “The supreme test of any civilization is whether or not it can teach men to become good fathers.”

Good dads, they say, are made, not born.

So there is hope for every one of us, as dads, no matter where we come from.

For more information about joining a fathers’ support group, there are resources in the community. For military veterans enrolled in VA health care, contact the VA medical center in Leeds at 413-584-4040 and ask for extension 4020. For military veterans eligible for the Springfield Vet Center, marriage and family counseling is available. Call 413-737-5167. In Greenfield, a fathers’ support group meets on Tuesday nights from 6 to 8 p.m. at the Community Action Family Center, 90 Federal St.

John Paradis, a retired U.S. Air Force lieutenant colonel, lives in Florence and writes a column published the second Friday of the month. He is a veterans’ outreach coordinator for VA New England Health Care System.